If precast beams contain straight, fully bonded tendons, they can be easily detailed and manufactured. The main benefit of pre-stressing is that it can apply the dead toad of the unit to minimize the transmission of the tensile stresses in the concrete.

But dead load is lost in such members since this tension remains most critical at the ends of the beams, where the alleviating effect owing to dead load is zero. The methods of deflecting and debonding tendons are frequently applied in pre-tensioned beams to obtain a pre-stress distribution much like that is obtained by the draped profiles of post-tensioned systems. It maintains some of the dead-load benefits, which lead to fewer tendons in the beams or a slightly smaller depth of beam than would be feasible with straight, fully bonded tendons.

Stress Control by Deflecting Tendons: The method of deflecting some of the tendons upwards towards the ends of a beam at a proper position along the span transfers the important section at transfer to this position, where vital relieving stresses as beam dead-load bending moment is accessible. Based on the stress computations for the end regions of the beam, the design engineer set the number of tendons to be deflected and the position of the deflection point.

The deflection point normally remains in the neighborhood of the quarter-span position, where three-quarters of the mid-span value of dead-load moment is accessible to neutralize the tensile stress (top fibre) because of pre-stress at transfer.

The angle of deflection of these tendons are placed in such a manner that the effective eccentricity and the pre-stressing force of the tendons do not generate a tensile stress of more than N/mm2 at transfer at the important sections, a limit set in the Code.

This method of deflecting tendons is specifically effective where continuity for live loads should be set in the finished structure since by deflecting some of the tendons upwards towards the ends of a beam, some compressive stresses are produced in the top fibre at the ends. This is useful for withstanding tensile stresses occurred because of the hogging moments caused by the passage of live loads on the superstructure. It also minimizes the formation of compressive stress in the bottom fibre because of prestress and live loads or any other loads at the ends of the beam.

Another benefit of deflected tendons is that the Code allows the vertical component of the tendon force to be applied in withstanding the imposed shear force on the beams in areas which stay flexurally uncracked at the ultimate limit state. This component is also suitable for the flexurally cracked regions and for examining the maximum shear stress condition in the member. Due to some limited test evidence, however, the Code does not allow relief against shear in these later conditions. Actually, the shear resistance of any section is decided in both flexurally cracked and uncracked modes and the lower value is selected. The shear links are then designed to bear the rest of the enforced shear force. Because only the tendons which are situated within the web width are deflected, the strand pattern for the whole unit should be cautiously chosen so that sufficient strands are available for deflecting upwards towards the ends to meet the stress conditions during the length of the beam.

To get more details, go through the following link engineeringcivil.org 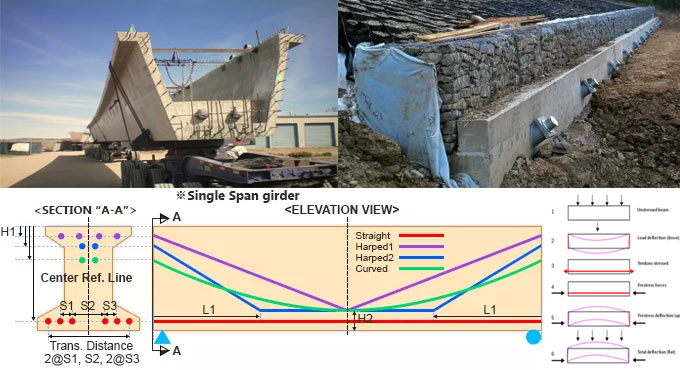