Details of design and construction process of Burj Khalifa

Excavation work began for Burj Khalifa is known as the tallest skyscraper in the world in and it’s excavation work was started in January 2004. It took 1325 days for the completion of the structure.

Structural System Description: 3D Structural Analysis Model of Burj Dubai TowerBurj Khalifa contains "refuge floors" at 25 to 30 story intervals which have great fire resistance capacity as well as individual air supplies to cope up with any emergency situation. With the support of reinforced concrete structure, the building becomes stronger as compared to steel-frame skyscrapers.

Designers intentionally constructed the structural concrete in Burj Dubai as "Y" shaped in plan with the purpose of minimizing the effect of wind forces on the tower along with the intension to retain the structure simple and support constructability. The structural system is defined as a "buttressed" core.

Every section contains its own high performance concrete corridor walls and perimeter columns and supports the others through a six-sided central core, or hexagonal hub. So, a tower is built with enormously rigid lateral and torsion capacity. An inflexible geometry is utilized with the tower that organized all the common central core, wall, and column elements.

Each tier of the building sets back in a spiral stepping pattern up the building. The setbacks are arranged through the Tower's grid, so that the building stepping can be completed by positioning the columns over with walls beneath to set a smooth load path. It facilitates the construction to get rid of the issues resulting from column transfers.

The setbacks are arranged in such way that the Tower's width alters at each setback. The benefit of the stepping and shaping is to "confuse the wind'1. The wind vortices don’t get structured as at each new tier the wind experiences a dissimilar building shape.

Structural Analysis and Design Facts: The center hexagonal reinforced concrete core walls set the torsional resistance of the structure same as a closed tube or axle. The center hexagonal walls are supported with the wing walls and hammer head walls which operate as the webs and flanges of a beam to withstand the wind shears and moments.

Outriggers at the mechanical floors facilitate the columns to contribute to the lateral load resistance of the structure; so, all of the vertical concrete is applied to support both gravity and lateral loads. The wall concrete designated strengths vary from C80 to C60 cube strength and employ Portland cement and fly ash.

To get more information on construction details, go through the following article aboutcivil.org 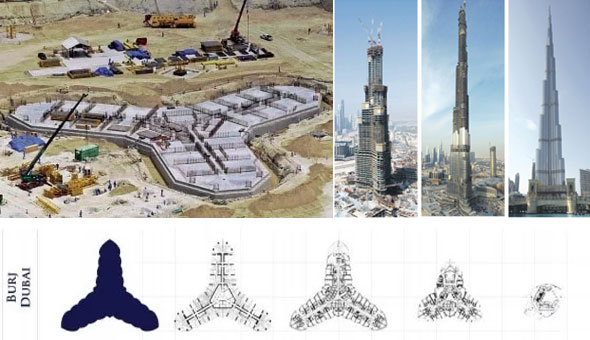