Bonds are like the arrangement or bricks to strong the imaginable interlocking and stop the flow of the vertical joints that can be done in various ways.

Bond is the arrangement of either bricks or stones in every course, so to ensure the greatest imaginable interlocking and to escape the flow of vertical joints in two successive courses; both on the face and in the body of a wall. Generally brick bonds are used in masonry work and these bonds are like patterns in which bricks are laid and it can be applied in both brick walls and paving; besides that it also used to concrete block and other kinds of masonry construction.

A bond is given to achieve the following objectives-

The types are divided as per laying and bonding style of bricks in walls and the bonds in brick masonry is increased by the mortar filling between layers of bricks and in channels when bricks are laid near to each other and in layers in walls. In brick masonry the most used material is cement mortar; line and mud mortars are also used sometime. Here is the list of the types of bonds which are used in brick masonry:

longer narrow faced brick is called as stretcher and this bond is known also as running bond which is created in the time when the bricks are laid with only their stretches, overlapping midway with the courses of bricks below and above. They come with the simplest repeating pattern but the limitation can’t make effective bonding with near bricks in full width thick brick walls. These bonds are generally used in the steel or reinforced concrete framed structures as outer facing and in cavity walls, boundary walls, gardens etc. Walls built with stretcher bonds are not enough strong to stand alone in longer span and height and need supporting structure like brick masonry columns at normal intervals.

Header is the shorter square face of the brick measuring 9cm * 9cm and the header bond is known as heading bond where all the bricks in every course are placed as headers on the faces of the walls. This bond is used for the construction of walls with full brick thickness measuring 18cm and the overlap is similar to half width of the brick.

It has only one course of stretcher and a course of header above it where headers are laid centered on the stretches in course below and every alternate row is vertically aligned. Quoin closer is used in the beginning and the end of a wall after first header to break the flow of vertical joints and a quoin close is a brick cut lengthwise into two halves and used at corners in brick walls.

it is also known as Dutch bond and is created by laying alternate headers and stretchers in a single course and the next course of brick is laid such that harder lies in the middle of the stretcher in the course below. The thickness is minimum one full brick but the problem of using it is that it need to be aligned vertically for best effects and they are weaker than English bonds for load bearing wall construction.

in this bond, the bricks are arranged for thick walls where facing and backing are needed to be constructed with bricks of different thickness and the bond has heading and stretching corners nicely arranged.

it is like English bond and is very strong to bear a good elevation where queen closer are beside the quoin headers.

It is like English bond but the stretcher courses are replaced by laying the brick on the edges and header courses lay on the beds.

The bonding bricks are arranged in any angle which helps to improve the longitudinal strengthens of thick walls made in English bond.

It is like herring bone bond but the difference is that the bricks are laid in a zigzag style that used in brick paved flooring.

it is very much adopted for one brick thick that can act as a garden wall or a boundary wall and for garden wall bond; it is possible to build uniform faces for a wall without much labor or expense and is very strong also. 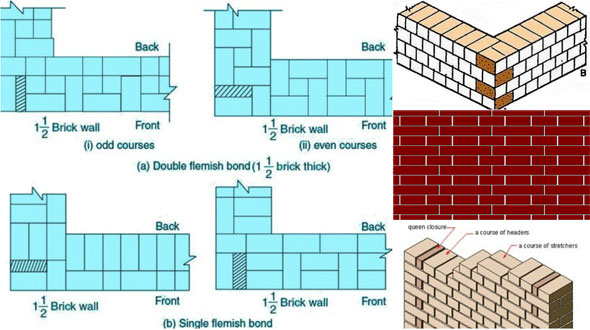