Variations among pier, abutment and column

This construction video tutorial sheds light on the variations among pier, abutment and column. It is a very important topic for civil engineering students.

Definition of Pier: Normally, pier stands for the types of column which are situated among the two abutments in the bridge to accommodate the load of super structure of the bridge.

It transmits the load of vehicles, slab and longitudinal and cross beams to the foundation.

Definition of Abutment: It is mainly applied at the ends of the bridge to keep hold of the embankment as well as bear the vertical and horizontal loads for the bridge super structure to the foundation. Abutments are normally built up from concrete to combat the heavy load of the vehicles.

Abutment and pier have to resist wind and seismic load other than the load transmitted to it from beams and are known as substructure of bridge.

Definition of column: In Civil Engineering term, the column refers to a vertical member that bears the compressive load as well as transmits the load from slab and beams to the Foundation or Footing.

Variations among Pier and Abutment

Piers belong to the internal supports of the bridge.

Abutments belong to the ends supports of the bridge.

More than two piers can be used in bridge construction.

The numbers of abutments are just two in the bridge at the ends.

Piers are built up among the abutments.

Abutments are the external support of the bridge.

To get more details go through the following video tutorial. 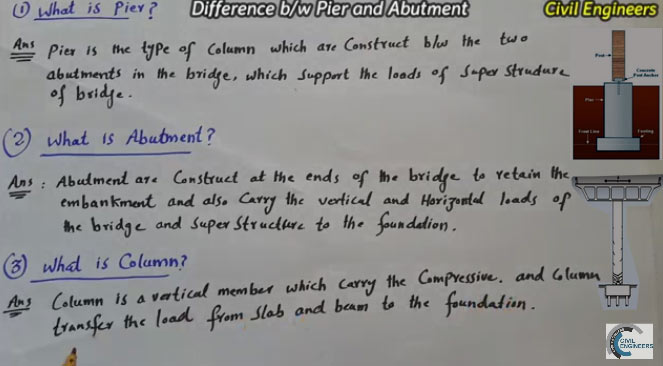