Earthquakes are one of the most feared forces on the planet. Earthquakes happen because tectonic plates collide and rub against each other. Most buildings do not collapse because of earthquakes, but due to the foundation displacing. This causes the top part to sway, vibrating in resonance till the tension forces crosses the threshold resulting the building to collapse.

Calculation Method of Concrete Quantity for a Staircase

Japan is a place which experiences earthquake on a daily basis. To combat this, a Japanese company has created a method which involves carbon fiber strands to make buildings more resistant to earthquakes. Komatsu Seiren, a Japanese company, has given a solution to this problem with a technology that allows the modification of an already built building to gain an extra layer of earthquake resistance. Carbon fiber strand

Carbon fibers are fibers about 5-10 micrometers in diameter composed mostly of carbon atoms. Carbon fibers have several advantages that include high stiffness, high tensile strength, low weight, high resistance to chemical and low expansion when exposed to heat. Carbon fibers are usually combined with other materials to form a composite.

Komatsu Seiren utilizes carbon fiber strands to create an interlocking webbing system that can transfer the forces from the earthquake directly to the ground preventing the buildings from vibrating. These strand rods are a thermoplastic carbon fiber composite.

These strand rods have high tensile strength yet are the lightest in its category. The strands are 5 times lighter that steel strands. 160 meters of these strands weigh a mere 12 kgs but has the same strength as a metal rod of similar length. Cabkoma strand rods guarantee a secured future for buildings that requires extra protection that have not already been prepared for a large earthquake. 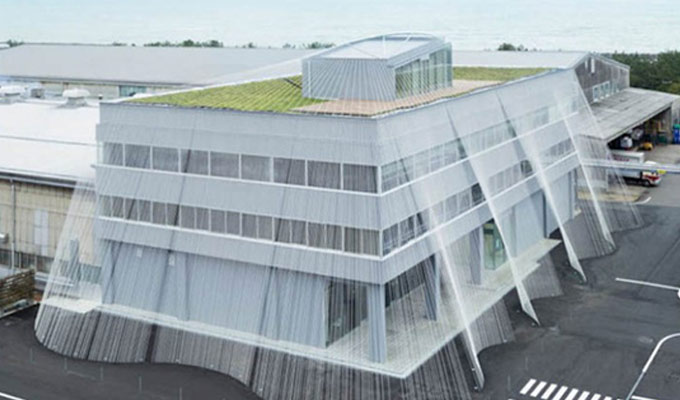