An exclusive course on structural analysis for civil engineering students

This is an exclusive structural analysis course that sheds light on an extensive series of materials which will be a great resource for civil engineering students. To get clear ideas on the topics covered in the course, you should have sound knowledge in mechanics of materials.

The course covers the following topics :-

Shear Force and Bending Moment Diagram Review - If the beam is loaded at random manner, the internal forces and moments are produced and the terms shear force and bending moments appear which are useful to analyze the beams furthermore.

Double Integration Method - The double integration method refers to a robust tool that can be used for resolving deflection and slope of a beam at any point to obtain the equation of the elastic curve.

Method of Superposition – Superposition method is used to determine the deflection. Fundamentally, a complex beam along with its loading is streamlined to a wide array of basic beams (one span) and with only one load.

So, the slope and deflection of a beam owning to various loads is equivalent to the sum of those as a result of the individual loads.

Moment Area Method - The moment-area method is mostly recognized for finding out the bending displacement in beams and frames. Under this method, the area of the bending moment diagrams is applied for working out the slope and or deflections at specific points along the axis of the beam or frame.

Force Method - The force method (also known as the flexibility method or method of consistent deformation) is applied to compute reactions and internal forces in statically indeterminate structures owing to to loads and imposed deformations. 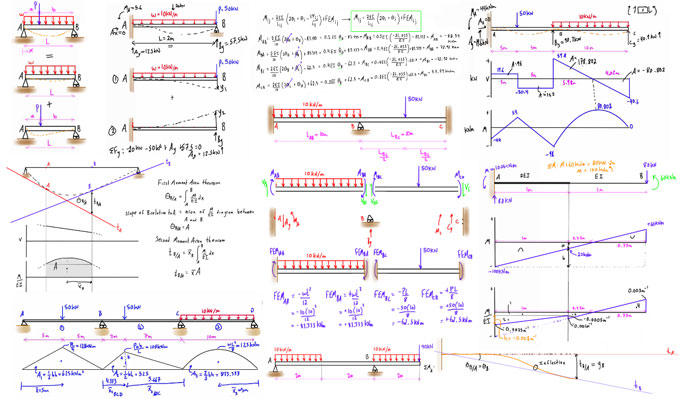