This construction video tutorial briefly explains what the most important brick test procedures are generally undertaken in the construction jobsite.

The details of the tests are given below :-

Compressive Test – It is performed to verify the strength of a brick. Under this test 5 samples of bricks are chosen randomly and sent them to laboratory and apply pressure on various bricks through a crushing machine. Now, take the average of all the results produced. If the averages is similar to 3.5 N/mm2, the quality of the bricks are good.

Water absorption Test – Under this test the bricks are selected in completely dry condition and taken their weight as W1. Then submerge them in water for 24 hours. Again, taken their (wet bricks) weight after 24 hours and named them as W2. Now find out the average with the following formula :

The recommended absorption rate should be between 15% – 20% for a good quality brick.

Impact Test – This test ensures the proper bond in a brick so that it can’t break easily. Under this test few bricks are selected and dropped them from a height of 1 meter.

Soundness Test – In this test two are chosen randomly and hit with each other, if metallic sound is produced and the bricks remain unbroken then these bricks are considered as good quality bricks.

Hardness Test – In this test, a metal or other object is used to put scratches on the bricks. If scratches are not produced, then these bricks are hard and treated as good quality bricks.

Structure Test – In this test, a brick is chosen and broken from the middle, if there are no cracks, holes, impurities found inside the bricks, then the structures are strong and these bricks are treated as good quality bricks.

To watch online demonstration, go through the following video tutorial. 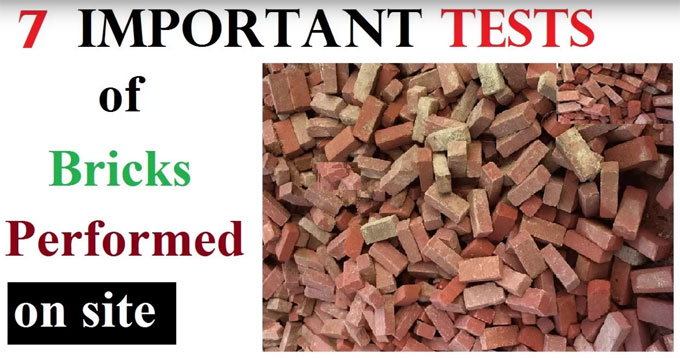