Types of Rock Reinforcement: The support given with rock reinforcements ranges from active type or passive type.

For active support, a predefined load is enforced on the rock surface while being set up. Under passive type, a load is formed when the rock mass deforms or dislocates.

The following types of rock reinforcements are commonly found :

1. Rock Bolts: This type of rock reinforcement is frequently used at the end of the borehole. These belong to steel rods which are grouted into the rock. These comprise of a grout anchor or friction on the rock. As soon as the anchorage is obtained, it is tensioned and a compressive force is produced into the adjacent ground.

The axial force produced operates on the rock-mass discontinuities which enhance the shear strength of the mass. This shear strength is produced through the pre-tensioning of the bolt.

2. Rock Dowels: This is a passive type of rock reinforcement for which a ground displacement is required for its activation. When the discontinuities in the rock mass are susceptible to displacement, the dowel undergoes both shear and tensile stresses.

3. Rock Anchors: This method of rock reinforcement employs compressive or uplift force to make any structure or rock mass stable which exist in the ground or underground. These belong to high tensile strength bars. These are pre-tensioned by fixing at the end of the borehole. 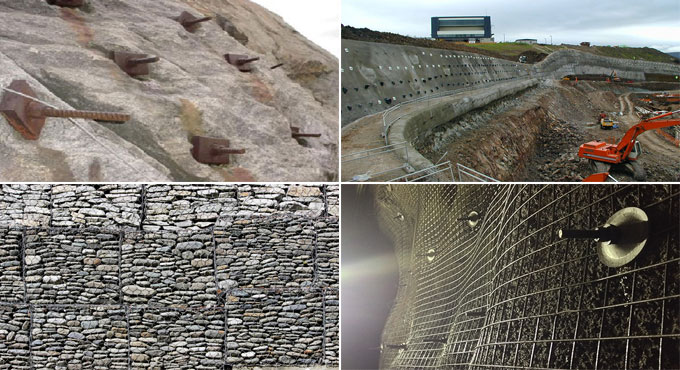