Every two years, Trimble gives out awards to the best BIM and Construction projects around the world. It is the Tekla Global BIM award, and it is chosen by a Trimble representative, and high-ranking industry professionals and media professionals. The competition was fierce among 135 projects across 36 countries. Let us see who are the toppers in this competition:

The 2020 Tekla Global Building Information Modeling (BIM) award goes to, as per Trimble’s choice, the Randselva Bridge in Norway. Sweco Structural usen Tekla Model Sharing to bring together teams all over Norway, Finland, Denmark, and Poland.

The huge project arguably enjoys the first place in the world’s longest bridges list, and is possibly also the first large bridge ever constructed entirely off a 3D model. This 3D BIM model was created using Tekla Structures, which took care of the parametric geometry, clash detection, and simulation.

On the bank of the Thames a giant 328 million euro development, the One Nine Elms had very special requirements being a mixed-use project. Core base rafts 20 feet underground required building and plant materials to be supplied from “mole holes” that wound around quarters. Trimble Connect was crucial in coordination in this project.

As with above, this project was also built from one core 3D model only, without reverting to 2D drawings the least bit. So that the reinforcement bars did not need to be done on-site, clash detection using BIM was very useful. This project was also one of the largest continuous concrete pouring ever done in London.

In the northern countries, this huge waste water treatment plant is one the most productive. This huge project was built with 93 thousand cubic meters of concrete, 9 million kgs of rebar and 1.5 million kgs of structural steel – and every bit of that was represented as data in its BIM model.

Helsinki enjoys another feather in the cap as the best public project award according to Trimble goes to the HUS Bridge Hospital and its Radiation Care Extension building. Utilizing precast buildings technology, the project required more than 8 thousand precast units and over 4 thousand tons of steel.

The massive BIM model of all that required to be built with 194 sub-models spread over 16 levels. To navigate the complex virtual construction, the designer teams used the help of AR (augmented reality) and VR (virtual reality). This was extremely helpful for the AEC, a hundred workers on-site, as well as the client.

This is a no-brainer – the main stadium for the Tokyo 2020 Olympics has to be the best recreational construction of the year. The 1300 ton structure was virtually built in a BIM environment by just five people, in under 10 months! The Tokyo 2020 Olympic Pool and Natatorium is a beautiful steel reinforced concrete structure.

Winner: Transmission Tower in the Form of a Lion and an Eagle, Russia – by Belenergomash BZEM, LLC.

This is one of those odd constructions that makes you go wow at your social media pages. This was actually a standard transmission tower, which is now covered in steel replicas of a prancing lion underneath a flying eagle – the symbol for the local town.

It needed 5869 steel parts and each of them were painstakingly designed in Tekla’s BIM software, including each nut and bolt to hold them together.

The steel parts were then cut, drilled and punched using CNC from Tekla Structures model, and this was done so accurately that the assembly never even needed so much as a trial.

These four students of the Universitas Lambung Mangkurat never imagined they will be getting such a huge recognition from the tech giant, when they started designing this giant mosque. It can accommodate about 16000 worshippers at once.

The designers were careful to reflect Islamic cultural and architectural details on the BIM model of this huge mosque. The structural and steel design was done using SketchUp and the details were done using Tekla Structures. The enormous (for students) building covers a whole hectare of ground. 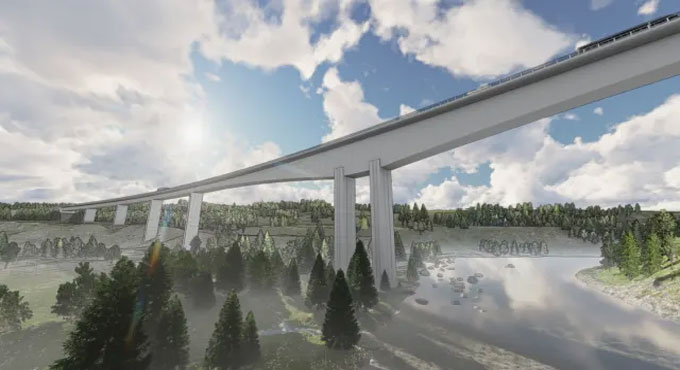