A brick bond belongs to a pattern where the bricks are placed. The applications of brick bonds are found on the walls as well as for brick paving for paths & patios, concrete blocks and different types of masonry construction.

Brick Bonds can improve the strength & stability of the structure, retain consistency to the structure and composition, and increase the visual appeal. Given below, the details of commonly used wall brick bonds :-

1. Stretcher Bond / Running Bond: It is also known as running bonds. The process is very simple to place this type of bond. Stretcher bond is useful when the walls of half brick thickness are required to be constructed. This bond is applied to build up several types of wall construction as follows :

Stretcher bonds should not be used for self-sustaining structural walls, but it is effective for building up the walls of less thickness. Remember, this bond can collapse when the thickness of the walls remains greater than half of the total length of the brick applied.

2. Header Bond: A header stands for the shorter face of the brick. In header bond brick masonry, all the bricks are built up in the header course. Under this type of bond, the overlap is done according to a half width of the bricks. The three-quarter brickbats are used as quoins in alternative courses. This bond is primarily applied for the erection of one brick thick walls.

3. English Bond: This bond contains alternating courses of headers and stretchers. Headers are placed in center position on the stretchers in the course underneath and each alternate row is arranged vertically. To rupture the continuity of vertical joints, a quoin closer is utilized at the start and end of a wall once the first header is provided.

A quoin close belongs to a brick that is cut into 2 halves according to length and applied to the corners in brick walls. This type of bond is useful for building up strong one brick thickness walls.

4. Flemish Bond: Under this type of bond, alternate headers and stretchers are contained in each course. Each header remains on the center of a stretcher over and below and each alternate course is started with a header in the corner. To rupture the vertical joints in the sequential courses, quoin closers are provided with alternate courses alongside the header.

5. Stack Bond: In a stack bond, all the bricks are simply loaded on top of each other and retained with mortar where all bonds are arranged properly. Due to its poor masonry structure and less strength, stack bonds are effective for decorative purposes.

As this bond is a non-structural bond, therefore it should not be used for the walls which need to transmit loads.

6. Dutch Bond: It is a customized form of the English cross bond that includes alternate courses of headers and stretchers. In this arrangement of the brick bond, each single stretching course is started at a quoin containing a 3-quarter bat. Each alternate stretching course contains a header set alongside the 3-quarter bat brick placed at the quoin. This bond is suitable for developing strong corners of the wall that is susceptible to extra loads.

7. Common Bond / American Bond: This bond contains courses of headers provided with each five or six courses. Header courses are placed in center position of the previous header course. This header bond usually functions as a tie brick among the fronting and the backing. To attain the plenty offset in a standard common bond, queen closers are provided at both ends of the header courses. The common bond is generally applied in outside load-bearing walls.

8. Facing Bond: This bond is effective for thick walls, where the facing and backing are selected for construction with bricks having different thickness. Normally, this bond comprises of heading and stretching courses which are provided in such way that one heading course comes after quite a lot of stretching courses. The load distribution of walls of this bond is irregular due to the variation among the facing and the total number of joints in the backing. It can also result in unequal settlement of the 2 thickness of the wall.

9. Diagonal Bond: It is perfect for walls with two to four brick thickness. This bond is generally provided at each 5th or 7th course along the height of the wall. Bricks in this bond are arranged end to end in such a way that extreme corners of the sequence gets in touch with the stretchers.

10. Rat Trap Bond: Under this bond, bricks are placed on edge or in a vertical location rather than the conventional horizontal position. It produces a cavity (hollow space) inside the wall as a result superior thermal comfort is maintained and the inside becomes cool as compared to the outside and vice versa. Because of the internal cavity, a little amount of materials is required for this type of walls. 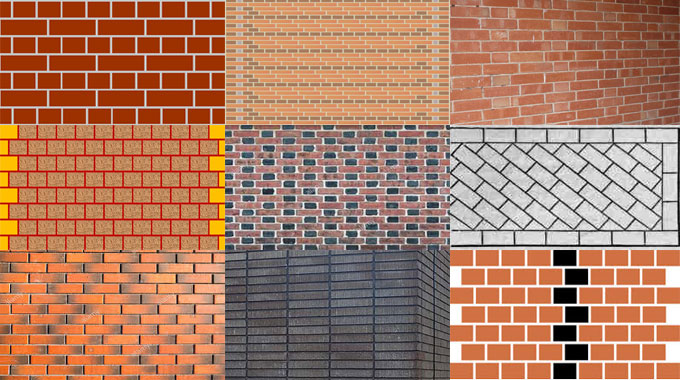