Dutch cities are famous for their canals, particularly Amsterdam, which has 165 canals. A wide variety of the city's old canals are listed on the UNESCO world heritage list. But the city of Ijmuiden recently became home to the world's largest canal lock.

King William Alexander of the Netherlands inaugurated the new canal virtually. A public contest organized by the Dutch authorities that received over 5,000 entries named the canal Zeesleuis, meaning sea lock. To ensure that the new Ijmuiden lock will be ready for opening, it has been extensively tested over the past few months.

The Noorderslius lock has had a history of malfunctions since it was built in 1929. It is due for replacement by the Ijmuiden lock.

Throughout the dredging and groundwork operations, Van Oord and Boskalis supported the consortium. These two companies will also be responsible for maintaining the canal depth for 26 years after the Ijmuiden lock has been opened.

The Ijmuiden lock was constructed to facilitate the passage of large, modern cargo ships into Amsterdam's harbor. Moreover, it is deep enough for ships to enter the canal at any time, without waiting for a favorable level of water.

The port city of Ijmuiden is located between the North Sea Canal and the port of Amsterdam in the Netherlands. The construction of the 500-meter or 1,640 feet long and 700 meters wide, which began in 2016, was supposed to be completed by 2019 but took longer with an increase in the budget of €300 million.

Key Reason of rise of this Project’s Cost

When Cora van Nieuwenhuizen was Infrastructure Minister in 2018, she said that setbacks in the construction had forced her to raise the budget. Media reports said that throughout the construction period, about 200 changes were made to the design by contractors BAM and VolkerWessels.

Rijkswaterstaat is to blame for the ambitious design, according to both construction companies. BAM and VolkerWessels claim compensation from the Dutch Waterways Agency in the Dutch trade magazine Cobouw.

The Netherlands asked its residents what they thought the world's largest canal lock should be named, despite design flaws.

Velsen, where Ijmuiden is located, reported it had received 5,000 names, including De Sluizenmoeder, in reference to the locks' mother, and De Irma Sluis, in reference to a sign-language interpreter who gained fame during press conferences on the Corona virus. As a result, Zeesleuis, meaning Sea lock, was opted for as the municipality's name.

A waiting pontoon will be constructed as part of the multidisciplinary project so that the boat can easily navigate through the new lock. Approximately 26 years will also be needed to maintain the new lock and wait for pontoons.

In an interview with Rijkswaterstaat, Jaap Zeilmaker compared the new canal lock to a big front door for Amsterdam. The Zeesleuis lock will benefit the economy by making transportation easier while providing flood protection as well.

The new sea lock will increase the flow of saltwater into the North Sea Canal. Agricultural and natural resources are sensitive to saltwater. To prevent the increase of saltwater, Rijkswaterstaat is building a structure in the Binnenspuikanaal or Inner sluiceway.

The pumping station or sluice complex will allow water to flow back to the sea through an opening at the bottom of this structure. This water remains in the North Sea Canal as freshwater. 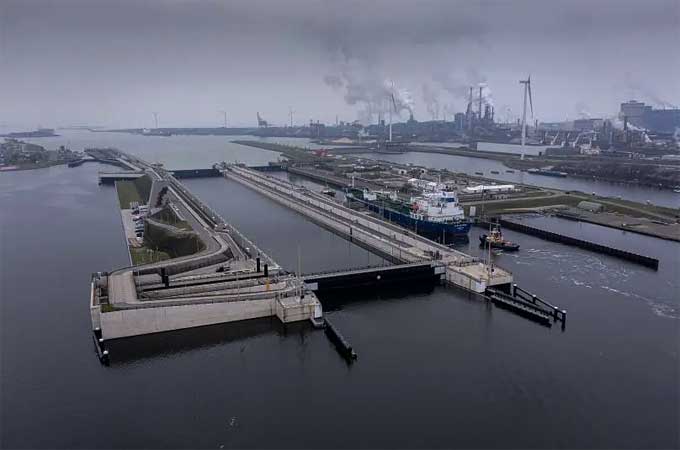