The construction business in Chicago has always been successful, to say the least. The city hosts major buildings and modern landmarks, as well as widespread infrastructure expansions and land developments in the outskirts of the prestigious city. By analyzing and understanding some of the biggest projects in the city, completed or ongoing, we can realize the technology and the efforts that went into developing them. This is called case studies, which are one of the best ways to understand the construction industry overall. 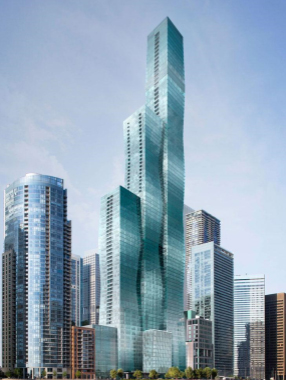 The official name of the complex is Lakeshore East, and it will host a mixed-use building with both residential and hotel usage. The Vista Tower is supposed to be 101 stories tall at 1198 feet (365 meters), and it will be divided into three buildings respectively of 47, 71, and 93 stories. The building was designed to contain 406 condos and 210 hotel rooms under the Wanda Vista five-star hotel.

Designed by Jeanne Gang, the Vista Tower is being constructed by the Magellan Development Group and the Wanda Group, who are going to pump in nearly a billion dollars into the project. Point to note here that when completed, the Vista Tower will become the world's tallest structure designed by a female architect.

The Tower's proximity to the Chicago River and Lake Michigan's lakefront park system will allow the building to define the skyline with a high level of prominence. The brilliantly imagined vertically stacked frustums (pyramids with the tops cut off) made of reinforced concrete will be adorned with a flowing glass facade, colored in gradients. The building will have 19 such frustums (at most) with spandrel covered floor slab edges, which is expected to create a unique visual texture for the outer skin.

The tower being so tall, may fall victim to wind-induced swaying. To prevent this, seven water-filled tanks are placed atop the tower. When the building is pressed by the wind to sway is a certain direction, the water in the tanks will slosh in the opposite direction which in turn will offset the swaying effect. Also, since this is not enough to prevent high powerful winds exerting more power on the building sides, there will be a large "blow-through floor", the first of its kind in Chicago, near the top of the tower which will let these winds through. 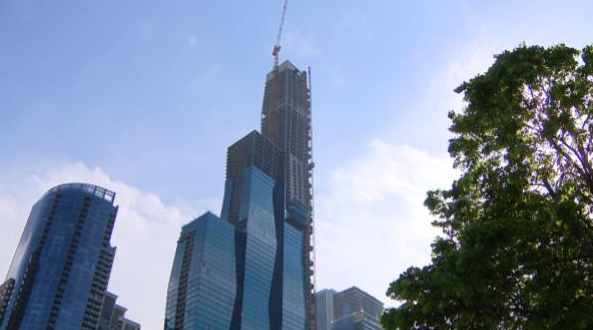 The inner structure of the Vista Tower has two key features: a 'Spine' wall and a buttressed core. The Spine wall is a reinforced concrete wall in the midsection of the tower, linking the two outer cores, which will enable the two towers to act as one unit. Together with the buttressed cores and perforated walls, this brings extra-strong structural stability in the building. At the top, at 1193 feet, the footprint of the building is smaller than other similar megastructures, which will also help increase endurance. 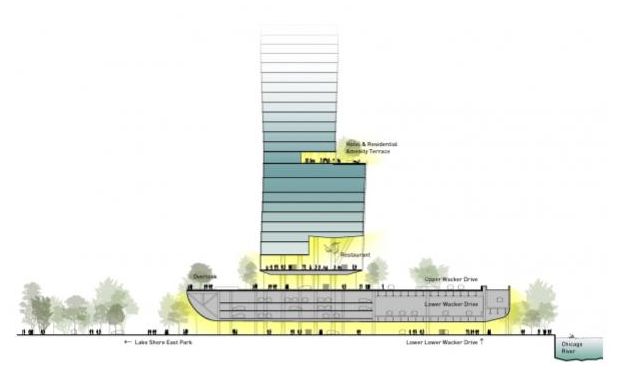 There is also an ingenious idea of engineering going into constructing the columns in the building. Vista Tower is being constructed around the so-called "Walking columns". These are essentially columns that shift in and out of place between floors in order to create the zigzag style of the outer side. These can move about 5 inches per floor, except on the floor plate where the building is the narrowest. Here the columns do not shift.

Set into an artificial grading system of roadways decked in three levels, the three entrances to the building will be on different levels as well. The main entrances with two dedicated lobbies (each for the hotel and the residential usage) are located along the uppermost Wacker Drive, with a public roadway passing in between them. A common side entrance is located along the Field Boulevard connecting the building to 'The Pedway', Chicago's internal pedestrian network.

If you want to buy a condo in the Vista Tower Chicago, your budget needs to be somewhere in between $840,000 and $9.75 million. Even then, half of the residential units are already pre-sold. 86% of these buyers are Americans, and about one-third of them are local to the state. The five-star hotel will be designed by Gensler while the condominium interiors are being handled by Hirsch-Bedner Associates. Philadelphia-based OLIN will design the project's green spaces, including the rooftop gardens.

The Vista Tower Chicago was proposed in 2014 and construction had started in 2016. Barring any unforeseen circumstances, the building will be open to public use by 2020. 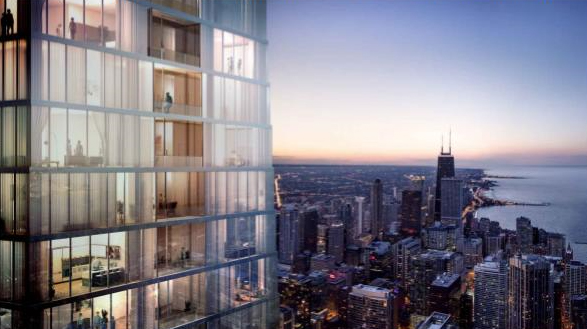