Best Cement Companies in India in 2022

Cement is an adhesive substance generally used to act as a binding material used in civil engineering and building construction. In a country vast and populated like India, there is a new construction being made each hour; as a result, the requirement for cement is also very immense.

India is currently the world's second-largest producer of cement, and India solely accounts for more than 7 percent of the global installed cement capacity. There is still a lot of room for improvement in the infrastructure of India's cement and construction sector.

The demand for cement in India is expected to be high in the coming years due to expansion in various industries, including housing, commercial construction, and industrial building. In addition, India's infrastructure is rapidly growing, which ensures an increase in demand for cement.

Which Is Best Cement Company In India?

A common person in India has a lot of questions while building a new house. He always wants to ensure that the best cement is being used while making the house.

The majority of the people take the cement suggestions of the builder (Mistri). Still, we must not fully believe the builder as there might be a chance for us to get cheated and receive subpar materials, which may damage the construction process as a whole, as cement is one of the most crucial elements used to build a home.

A big and well-reputed brand's cement must be used as the cement will be of the best quality possible, and a consumer could trust the company with blind faith.

The biggest cement companies present in India are listed below in order according to their current market share as of 2022.

UltraTech Cement is currently the market leader in the cement manufacturing industry. UltraTech Cement Ltd. is India's third-largest manufacturer of grey cement, white cement, and ready-mix concrete (RMC). It is owned and operated by Aditya Birla Group. The company was established in 1987, and the company's headquarters is located in Mumbai.

The production capacity of the company is more than 102.745 million tons. The cement they produce is of the best quality. The company has a market capacity of 211,716 Cr with a market share of 21.40 percent.

Ambuja Cements Ltd is a part of the global conglomerate LafargeHolcim. It is the second-biggest manufacturer of cement in India based on turnover. It generates a revenue of Rs26,646 Cr with a production capacity of 29.65 million tonnes per annum.

Ambuja Cement has provided hassle-free, home-building solutions for more than a decade through its uniquely sustainable development projects and environmentally friendly practices. They have a current market share of 6.2 percent.

Shree Cement LTD is the third-largest cement manufacturing company in India. The company was formed in Rajasthan in the year 1979 by the Bangur family based out of Kolkata; presently, the company has changed its headquarters to Kolkata. The main selling point of the cement manufactured by the company is that they provide high-quality cement at a much cheaper rate than any other company on this list.

They have a production capacity of 37.9 million tonnes per Annum and have a total market share of 7 percent of the entire cement industry of India.

Associated Cement Companies Limited (ACC) is also among India's top cement manufacturers. It was the first cement maker to contain environmental protection as a dedicated goal. The company currently has 12 manufacturing units in India and uses advanced technologies to generate high-quality cement. The company generates revenue of 15,398 Cr and has a production capacity of 28.4million tonnes per Annum. They have a 6 percent share of the entire cement industry of India.

Dalmia cement was established in the year 1939 in Delhi by popular industrialist Jaydyal Dalmia. Dalmia Bharat Ltd is ranked fifth among all of the Top 10 Companies in Cement by overall revenue. Their cement is of good quality and is widely available throughout the market.

Consumers can choose from a wide range of cement commodities under the brands Dalmia Cement, Konark Cement, and Dalmia DSP, all of which belong to the same parent company.

They are also the largest producer of slag cement in India. The total capacity production of the company is 26.5 million tonnes per Annum. They have a 5.5 percent share of the entire cement industry of India.

These were the list of the top five cement manufacturing companies of India. All of the companies mentioned above provide best-in-class quality cement products, and one can not go wrong if they choose cement from any one of the companies mentioned above. The consumer must choose the cement brand according to his needs, and according to the brand the consumer trusts the most. Choosing the best quality cement will ensure that the building to be constructed with the cement will be of high quality and will stand the test of time. 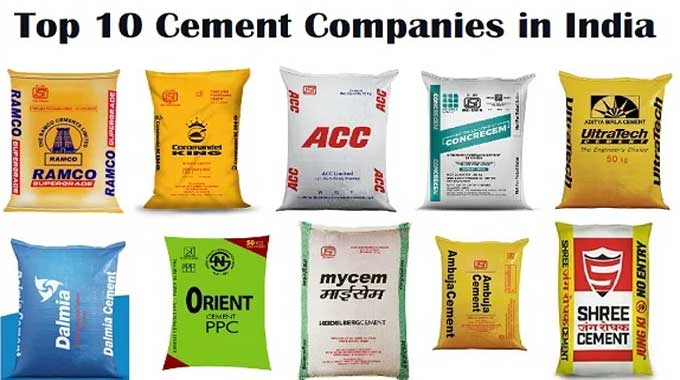