The objective of superstructure is to bear different types of loads operating on the structure which range from dead load, live, load, wind load etc. These loads are then transferred to the underlying soil through the substructure.

Each element of superstructure is applied as a specific purpose, but the prime function is to arrange privacy, safety to the inhabitants. Wall and roof safeguards from the surrounding, doors permit entry and give safety, windows arrange requisite sunlight and fresh air and floor provides a leveled surface to live and protection from beneath.

Floor: A floor normally comprises of a support structure known as a sub-floor on top on which a floor cover is placed to arrange a walking surface.

Flat – Should contain a slight slope for drainage

Gable – Two slopes intersect at a ridge. Two walls expand up to the ridge.

Hip – Two gables, a pyramid is treated as a hip roof.

Gambrel – Four slopes in one direction, the usual barn roof.

Mansard – A four-sided gambrel-style hip roof formed with two slopes on each of its sides with the lower slope, perforated by dormer windows, at a steeper angle than the upper.

Beam: Beam stands for an inflexible structural member formed to bear and transmit transverse loads across space to supporting components. 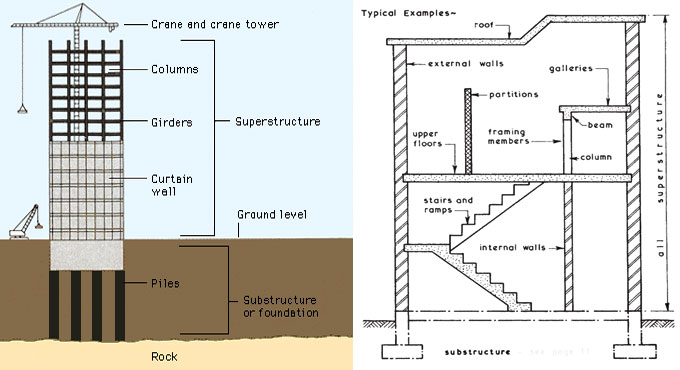