Different types of foundation and their usefulness

All the structures have foundation at the base that offers the following functionalities:

Foundation is based on the following points :-
Foundation is categorized depending on the dispersion of load to the ground into two sub-categories like shallow foundation and deep foundation.

Categorizarion of Shallow Foundation:
Based on the design, the shallow foundation is classified as:

This type of foundation runs consistently along the direction of the wall and facilitates transferring load of the wall into the ground. Wall footing are mostly applicable where transferrable loads are small and cost-effective in compact sands and gravels. For this type of foundation, the width remains 2-3 times the width of the wall at ground level. Wall footing is built up with stone, brick, plain or reinforced cement concrete.

Column Footing
Column footing are useful and inexpensive for the depth surpassing 1.5m. For this type of foundation, the base of the column is distended. Column footing comes in the shape of of flat slab and is developed with plain or reinforced concrete.

Combined Footing
Combined footings belong to the foundations which are built in common for two or more columns in a row. It is generally formed if the footing for a column is spreaded outside the property line. It is applicable if the two columns are placed narrowly and the soil on which the structure is developed contains low bearing capacity. The shape of the combined footing appears as rectangular or trapezoidal.

Strap Footing
If an edge footing fails to spread outside the property line, it is connected with the other interior footing through a strap beam. Such footings are defined as strap footing. or sometimes cantilever footing.

Mat Foundation
A mat foundation belongs to a combined footing that covers the whole area below a structure and supports all the walls and columns. It is also called as raft foundation. Mat foundation is mostly suitable for the following reasons:
Permissible bearing pressure is low.
The structure is weighty.
The site is located with highly compressible layer. 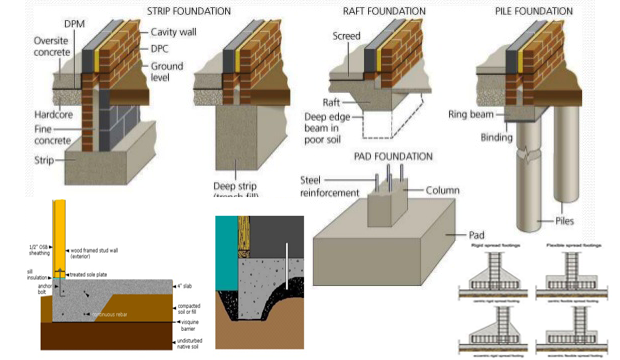