Wall is a structural element of a building. It divides a space into two spaces (rooms) and provides safety and shelter. Generally, walls are divides into two types outer-walls and inner-walls.

Load bearing wall is the whole building structure is rested on walls instead of columns. Basically the loads from slab transfers to the beams, from beams to the columns and then it spread.

Partition walls in the building are the best example of Non-load Bearing Wall. It doesn’t support any floor or roof loads. Their thicknesses vary between 100mm to 125mm.It wont carry any weight of the structure.

It is constructed for dividing a space (room) into two spaces (rooms). It can be removed or separate without affecting the building structure.

Retaining wall which is built to maintain the unequal level of the ground. These walls are relatively rigid walls and used to support soil lateral. The wall can be made of RCC or CRS.

This wall which is constructed for the lift pit, Water sump or Staircase retains the soil. The wall bears two pressures on it either it may be wind pressure and soil pressure neither wind pressure or water pressure.

Shear wall is carrying the resist of forces. These walls are used to hold the lateral force exerted the structure due to wind, earthquake or other lateral load.

As an example of the water tank. This water tank is constructed on heights which split Wind pressure on it. In this water tank the water which creates water pressure inside the tank and Shear wall is resists these forces without any deflection.

Which is constructed by regular size of stones which are well finished & dressed, its called Course Rubble Stone masonry wall. These types of wall are generally looks in bridges, compound walls or boundary walls. 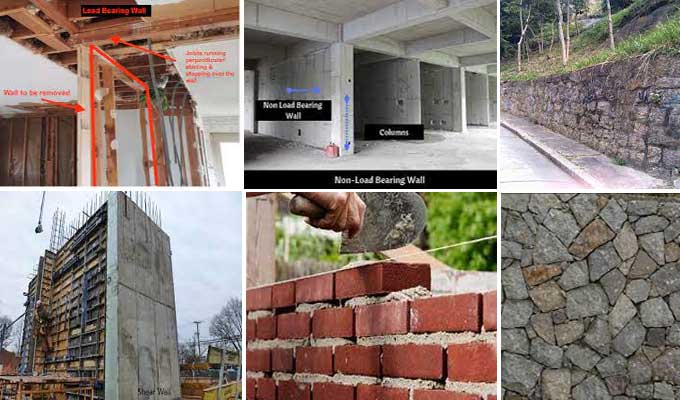