Impacts of earthquake on structures

Earthquake produces severe damages to the structures. For this purpose, thorough knowledge about the seismic effects on a structure is required. The designers and contractors should be capable of analyzing the effect of seismic forces on buildings to adopt protective measures against failures and collapses.

When earthquake strikes on structures, it develops damaging inertia forces which lead to deformations as well as horizontal and vertical shaking.

Given below, detail explanation about these effects :-

Impacts of Earthquake on Structures

The susceptibility of the roof structure to stand at its original position is known as inertia. The inertia forces lead to shearing of the structure that can consolidate stresses on the fragile walls or joints in the structure causing failure or perhaps total collapse. Lastly, more mass signifies greater inertia force and due to this lighter buildings can resist the earthquake shaking efficiently.

2. Impact of Deformations in Structures: When a building undergoes earthquake along with ground shaking, the base of the building proceeds with the ground shaking. But, the roof movement varies from that of the base of the structure. This variation in the movement produces internal forces in columns and as a result the column goes back to its original position.

3. Horizontal and Vertical Shaking: Earthquake contributes to shaking of the ground in all the three directions X, Y and Z, and the ground shakes indiscriminately from side to side along each of these axis directions. Normally, the purpose of designing the structures is to resist the vertical loads in order that the vertical shaking resulting from earthquakes (either adds or subtracts vertical loads) is controlled through safety factors provided in the design to sustain vertical loads.

However, horizontal shaking along X and Y directions is dangerous for the operation of the structure as it develops inertia forces and lateral displacement and consequently sufficient load transfer path should be arranged to resist its detrimental influences on the structure.

Exact inertia force transfer path is formed through adequate design of floor slab, walls or columns, and connections among these structural components. It should be noted that the walls and columns are vital structural components in transmitting the inertial forces. The masonry walls and thin reinforce concrete columns create weak points in the inertia force transfer path.

4. Other Effects: Due to earthquake various other effects may occur which range from liquefaction, tsunami, and landslides. These belong to the indirect effects of strong earthquakes that can lead to significant devastation. 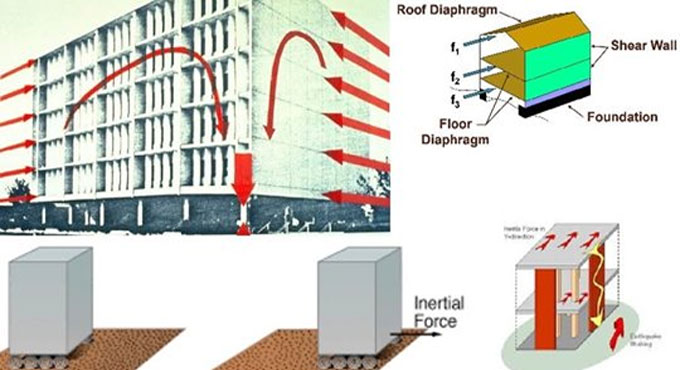