How to build up an earthquake-resistant structure

Earthquake means quick shaking of the ground due to the shift of rock and tectonic plates underground. The ground appears as solid, but the topmost crust of earth is deep and long periods of time produce pressure to develop among plates and fissures.

When the pressure is applied, seismic vibrations and fierce shaking reverberate to the surface which instantly impact miles of land. Once the initial quake hits, aftershocks happen to create further damage.

The buildings should withstand radical movement and foundation shifts so as to reduce damage and safeguard the people inside and around them. Earthquake-resistant building designs should be created based on the following characteristics which impact their structural integrity: stiffness and strength, regularity, redundancy, foundations, and load paths.

Stiffness and Strength: While creating design for earthquake-resistant buildings, safety professionals suggest sufficient vertical and lateral stiffness and strength – specifically lateral. Structures are likely to deal with the vertical movement resulting from quakes superior to the lateral, or horizontal, movement.

Devoid of taking earthquakes into consideration, professionals still concentrate on a building’s vertical stiffness and strength since it has to support itself. However, earthquakes present new directional forces and owing to these, buildings will shift left and right, and, if not constructed perfectly, will rapidly destabilize.

Regularity: This characteristic pertains to the movement of the building if pushed in lateral directions. According to safety professionals and building designers, the building should move uniformly in order to disperse the energy devoid of placing extra force on one side or another. When a building is uneven, then flaws will be detectable while the building shakes. The flaws will be settled and the structure will experience concentrated damage – which settles the structure completely.

Redundancy: It is a vital safety characteristic while designing for safety. Redundancy assures that there exist several strategies in place whether one fails. These can possibly be add to the building cost, but redundancies become vital if/when a natural disaster like an earthquake happens. Safety professionals suggest to uniformly allocate mass and strength during the structure so strength isn’t entirely dependent on one factor.

Foundations: A steady foundation is a vital characteristic of constructing a large structure irrespective of natural disaster risks. It is important for a building’s long-term existence, and a robust foundation is required to withstand an earthquakes powerful forces. Different areas have unique foundational characteristics that define how a structure’s base needs to be reinforced. Professionals should stringently monitor reactions of the ground and movement prior to starting of construction. The buildings developed to withstand fierce earthquakes contain deep foundations and driven piles. To settle these radical measures, the foundations should be joined properly to facilitate moving as a unit.

Continuous Load Path: Binding into the stable foundation characteristic, structural and nonstructural elements of a building should be interlinked in order that inertial forces are dispersed. Numerous points of strengths and redundancies distribute the force rather than the quake partitioning the foundation apart. It refers to the continuous load path characteristic that safety professionals, architects, and engineers should be aware of at the time of creating the design. When the structure is not entirely fastened jointly, elements fail to shift separately and collapsing can occur. The incessant load path is the journey of earthquake through the building – laterally and vertically. The path should be intact so that it can disperse an earthquake’s powerful shudders. 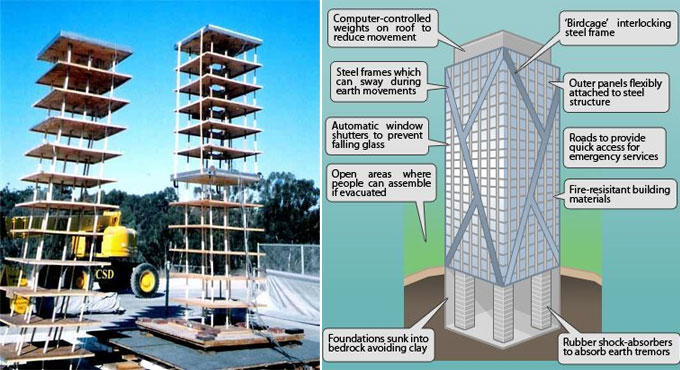