“Honeycombs” or the tiny hollow voids in the concrete, before going into the topic lets understand how the concrete works. Concrete is a composite material which is mixed with cement and water to make a paste and pour into the structure or framework which later hardens to create a strong foundation, so this honeycomb acts just like it is named, it is numerous tiny hollow remaining within the concrete.

These honeycombs looks exactly like bee nests. They were both visible and sometime remains invisible through our naked eyes. The honeycomb can also be defined as an open invitation to the rusting as it clearly forms a pathway for water and air to pass which at last results in Rusting in the iron beam inside.

A particular structure needs lots of great care and patience to get fully done so honeycombing can be widely describe as cancer for any structure, if found any here below are some remedies and caused for honeycombing hopefully can be your help.

How the honeycomb forms

1. The formation of honeycomb is mostly depends on the vibration happens during the creation of the cement paste.

2. The honeycomb can also happen when the concrete fails to match the desired functionality.

3. When the appropriate water and cement ratio increase or decreased their forms a high chance that the foundation has honeycombs in it.

4. Improper or incorrect amount of the substances while mixing can also lead to Honeycomb.

5. Honeycombs is sure a major defect in the structure as it clearly reduces all kind of load bearing ability but also create a high chances of Corrosion process.

6. Honeycombs also forms when few critical spots in the structure like beams or columns the paste hardens in an undesired way for which leads to formation of Honeycomb.

Ways to prevent from Honeycomb

1. To prevent from damaging your desired structure in the cruel hands of honeycomb a proper guidance and professional outlook should be hired.

2. If anyhow the structure is detected with Honeycombs the best and effective way is only to reconstruct the structure at your earliest no kind of other fixing could help from the honeycombs.

3. In case of honeycombs on surface of the structure with the professional permission only a non dry-up chemicals based on cements can be put to use.

4. Many highly esteemed structure and formation have failed to stand up against this Honeycomb’s destructive hands; the structure lasted for not more than 40 years on average.

5. Within the gaps of columns and beams concrete with more or less 20 to 25 mm aggregate is likely to be used with slightly increasing the water level with cement can make the structure Honeycomb proof.

7. Appropriate time should be given to dry up the concrete.

8. The concrete should be fully compacted otherwise there will be a higher risk of honeycombing. 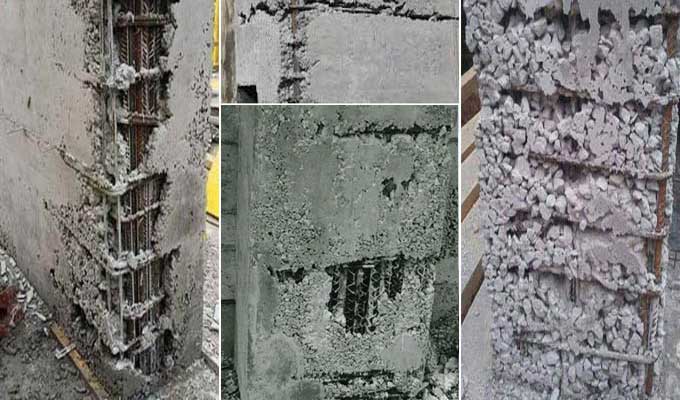