How beams are categorized on the basis of different factors

In structural engineering, various structural members are titled on the basis of their behavior under applied load. If the primary mode of delivering the load occurs due to bending then the structural member is known as beam. It can be also said that a beam belongs to a structural component that has the ability to resist load initially by making resistance against bending.

Beams usually bear vertical gravitational forces but can also be applied for bearing horizontal loads (e.g., loads originate because of an earthquake or wind). The loads which beam bear are transmitted to columns, walls, or girders and which then transfer the force to the adjoining structural members and lastly to the ground.

Categorization of Beam: Beams are distinguished with their support condition, profile (shape of cross-section),geometry, equilibrium condition, and their material.

Simply supported – Beams are supported on the ends which can rotate easily without any moment resistance.

Fixed – Beams are supported on both ends and constrained from rotation.

Over hanging – Simple beams which are expanded beyond its support on one end.

Double overhanging – Simple beams with both ends extending beyond its supports on both ends.

Continuous – Beams are expanded over in excess of two supports.

Cantilever – A projecting beam that is fixed only at one end.

Trussed – A beam is reinforced with the inclusion of a cable or rod to develop a truss.

Categorization based on indeterminacy: The design of beam is mainly created for bending moment and shear force. Assessment of these bending moments and shear force is called analysis. A beam is classified into following two categories on the basis of the type of analysis necessary to work out the reaction: 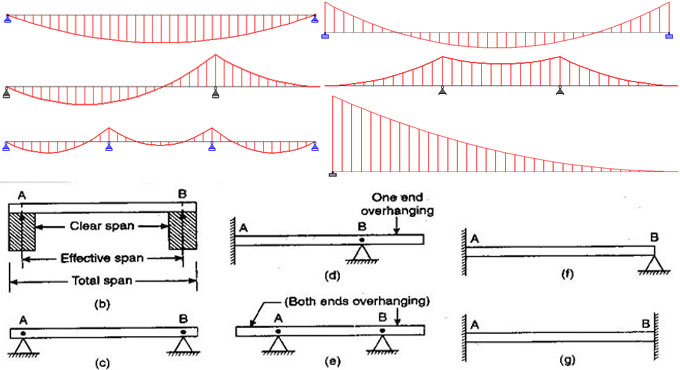