How concrete is mixed in different ways

Concrete belongs to a composite material formed by cement, sand, coarse aggregate, water and chemical admixtures (if necessary). To maintain the superior quality of concrete, the materials of the concrete should be blended properly so that the quality of concrete is not impacted.

A well-mixed concrete is formed on the basis of the following conditions:

• The color of the concrete should be consistent.
• Admixture of all concrete materials like cement, fine aggregate, coarse aggregate and water should be uniform.
• Cement paste should wrap all the surface of the aggregate.
• Segregation should not happen as soon as the mixing of concrete is completed.

Mixing concrete is dependent on the following three options:

Hand mixing (Mixing Concrete without a Mixer): Hand mixing stands for the method of mixing the different materials of concrete by hand. Mixing concrete devoid of a mixer is suitable for small works. Mixing of materials is executed on masonry platform or flat iron sheet plates.

• Expand the measured quantity of sand on the platform, and then unload the cement on the sand.
• The sand and cement should be blended thoroughly with the help of shovels in the dry state.
• The measured amount of coarse aggregate should be extended, and the mixture of sand & cement should spread on it and mixed in an exact manner.
• Depression is provided at the centre of the mixed materials.

• Include 75% of the required quantity of water in the depression and blend well by the shovels.
• Include the leftover amount of water and the mixing method should be carried on unless a uniform colour and consistency of concrete is procured. Time of mixing concrete should not be in excess of 3 minutes.
• The mixing platform should be washed at the end of the day’s work.

The machine mixing is performed in the following ways:

Ready Mix Concrete: Ready Mixed Concrete (RMC) is developed in the factory or in a batching plant and supplied in a ready-to-use manner. The quality of the consequential concrete is superior as compared to the site-mixed concrete.

Less time is necessary for ready mix concrete as compared to site mixing (hand or machine mixing) and quality of concrete is also greater than the site mixing. 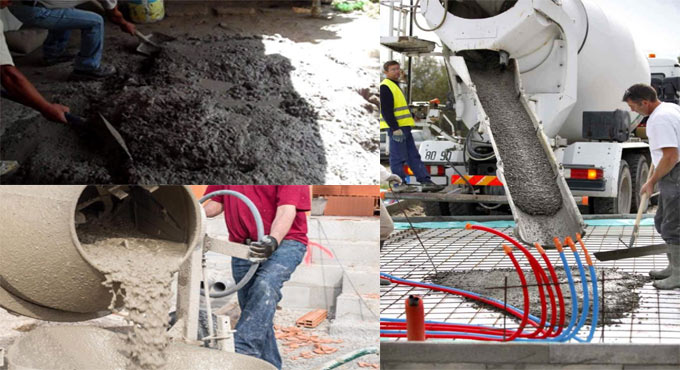