What is Mat Foundation and its Types

What is a Mat Foundation

When the ground is rather soft, or the soil has tendency of settling, the area of the footing needs to be increased so as to distribute the load evenly on a larger portion of the ground. Or, there may be an abnormal amount of heavy axial loads in the structure. While we can enlarge the area per-footing, it isn’t safe – one of the footing may settle causing strain in the whole structure. Also, at one point they will start to overlap.

The mat foundation is not always just a large flat slab – there are variations in the design.

Also, mat or raft foundations are not good for too large buildings. You can support up to 10 floors of a medium-sized residential or commercial building, but no more.

To improve the flexural stiffness in the slab, modifications are done while casting. Based upon what kind of structural differences are made in the slab, mat foundations can be categorized in the following manner.

A flat plate mat foundation is essentially a simple flat slab with no modifications. It is also called a flat raft. There are no special stiffening additions to the foundation system in this, except maybe some shear walls.

If there are increased axial loads in the columns, then extra depth of foundation is required under the columns. This leads to an increased bending moment and shear reinforcement.

This has a few downsides like increased expenses. Also, after a certain level, you can’t just pile on extra depths under the columns you have to increase the thickness of the whole slab. Additionally, the under-structure projection can be quite difficult to construct.

This is essentially the same thing as the above, but this time the reinforcing projections on top of the slab, not underneath. This is greatly easier to build, however, the projections above the slab render it unusable for any other purpose.

If there are even more axial load on the columns, then it cannot be handled by simple thickening of the plate under columns. In this case, you have to use beams between the columns underneath them, which will provide additional stiffness.

This is expensive, but this method has an additional benefit of reducing the thickness of the slab altogether.

Going a further step from the above method is the cellular raft type mat foundation. In this method, the top slab as well as the bottom slab are both constructed between beams. This provides even more stability and stiffness to the foundation.

When you cannot secure the bottom of the pile to the rock or the end bearing of the pile is insufficient, the pile raft foundation is constructed to provide the ultimate stability in general construction. It can be used in high-rises more then 10 floors tall and is incredibly powerful.

However, it is the most complex among the mat foundation types, and it is difficult to build as well. It depends upon the curve of load versus settlement in that location, and changes with time. Initially, the pile takes the full load of the column, then as the settlement happens the load shifts slowly from pile to raft until the raft is talking all the load. 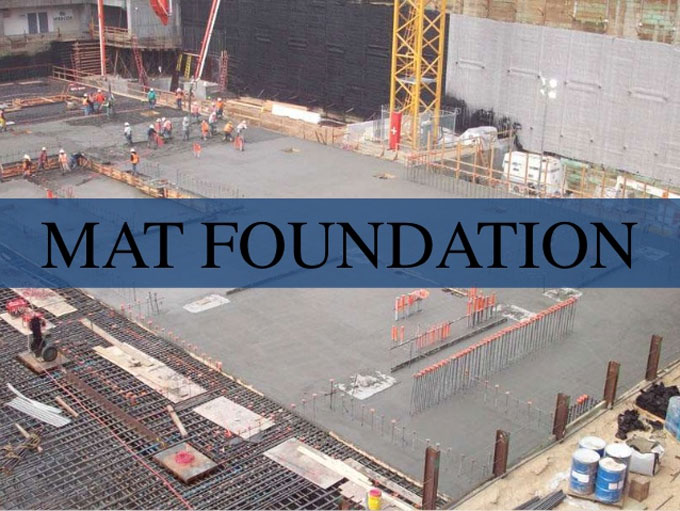