Fundamentally, the force produced through a concrete compression machine is a definite value. For the use of normal concrete strength, suppose under 50MPa, the stress provided by a 150mmx150mmx150mm cube is adequate for the machine to smash the concrete sample.

However, when the intended concrete strength is 100MPa, under the equivalent force (about2,000kN) delivered by the machine, the stress under a 150mmx150mmx150mm cube is inadequate to crush the concrete cube.

Concrete cube mould with size 150mm or 100mm is applied for aggregate size of not more than 40mm and 25mm. Cube mould for test should be formed into steel or cast iron containing smooth inner surface. Each mould should contain steel plate to support and avoid leakage.

Compacting steel rod should be used with 16mm diameter and 600mm length.

The test should be conducted by compression test machine.

Method: Mould and base plate should be cleansed and employed with oil so that the concrete can’t fix to the side of the cube. Base plate is affixed to the mould with bolt and nut.

The cube should be filled with concrete in three layers.

Each layer should be consolidated for 25 times. This process should be accomplished systematically and compaction should be finished equally to all the surfaces of the concrete. Compaction is also done with machine.

The surface of concrete should be leveled to retain the equivalent level with the upper side of the mould.

Cubes which are produced at construction site should be wrapped with plastic cover for a period of 24 hours prior to remove the moulds.

After remoulded, the concrete cubes should be drowned in water for curing.

Compression strength test should be conducted for concrete at age 7, 14, and 28 days through compression test machine. 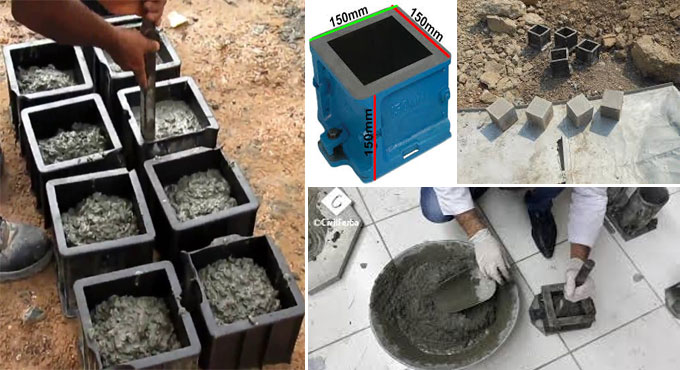