Pad foundation stands for the foundation that is specifically developed for retaining concentrated loads out of a single point load like structural columns. Pad foundations are specifically designed to provide support to individual or multiple columns, scattering the load to the ground underneath. They are usually square or rectangular in plan, the plan area is defined by the allowable bearing pressure of the soil. The shape in plan will be determined by the arrangement of the columns and the load will be transmitted into the soil.

The thickness of the slab should be adequate to make sure that distribution of the load is perfect. The top of the pad should have been sloping (i.e. the pad is denser in the centre as compared to it is at the edge). It provides a cost-effective solution, though there are construction issues which are associated with casting the slope.

Strip foundation is utilized to provide support to a line of loads like load-bearing walls. As for example, closely-placed columns deliver the imperfect application of pad foundation and strip foundation may be a good choice.

Raft foundation comprises of a concrete slab which expands over the entire loaded area in order that loads from whole structure are expanded over a broader area that results in minimizing of the stress of foundation soils. Besides, raft foundation is useful for resisting differential settlement. 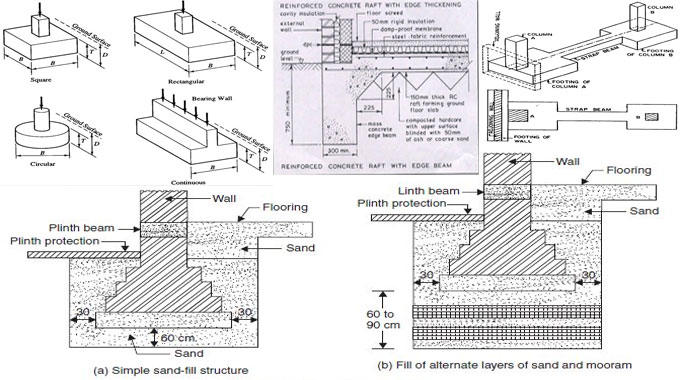