7 Differences between Plastering and Pointing

Plastering is the process which covering the rough walls and uneven surfaces in the construction of the houses and other structures with a plastic material, is called plaster. It protects the masonry work from.

To provide an even, flat, regular, clean, and durable finishing surface and, sometimes, to improve appearance also. To preserve and protect the surface from atmospheric effects by acting as a protective coating.

Provides a satisfactory build or ground for decorating the surface by applying whitewashing, color washing, painting, and distempering. In that case the internal plastering and the basic objective is to protect the surfaces against dust and annoying vermin.

Lime plaster: When lime forms the building material, the plaster which is called Lime plaster.

Mud Plaster: Mud plaster is one type of plaster which are mostly used in case village and temporary unfinished construction. This is the cheap type plaster.

Water-proof plaster: ZONIL HARD which also name as waterproofing plaster, this is an extremely waterproof dry plaster mixture that will create a waterproof barricade after the application.

What is the Pointing?

Pointing which is an art of finishing the mortar joints in expose brick or stone masonry with the suitable cement or lime mortar.

It should be noted that the mortar joints are the weak spots in a structure and hence they should be properly protected from the fragment effects from rainwater, snowfall, can be adopted in the places of low rainfall.

Stuck pointing: When the lower edge of joint is keep inside the face of brick or stone it called over head stuck pointing.

Tuck Pointing: A channel or groove of 5 and 3 mm width and depth is create middle mortar of joint is called Tuck Pointing.

Flush pointing: Flush pointing which is the most accessible type of pointing and it is generally utilized in brick masonry and stone masonry.

Beaded Pointing: Beaded pointing which is made by steel iron rod have a concave edge, and provides good appearance.

Rubbed or Grooved or Keyed Pointing: This tuck point is a channel or groove of 5 and 3 mm width and depth is create in morter joint. 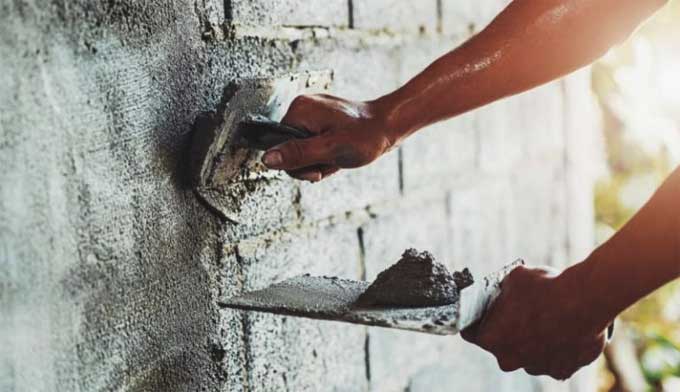