The Strip foundations are by far the most popular type of foundation. A strip foundation is a strip of concrete that runs beneath all load-bearing walls, as the name implies. The strip's width is determined by the soil's allowed bearing pressure and the building load. The strip must be long enough to rest on solid ground. Weaker soils and larger loads will necessitate broader foundations to disperse the weight over the necessary ground surface.

The soil's qualities will also determine the depth. For example, on clay soils, the foundation must be set deep enough to prevent being impacted by volume changes induced by the seasonal movement of trees. It must be deep enough in sands, gravels, and some silts to minimize frost heave movement.

Based on their characteristics, there can be two types of Strip foundation; they are as follows:-

The most common type of foundation is the deep strip foundation, which is also the cheapest provided the soil conditions are suitable. A reinforced concrete strip supports the walls. The trench can be of any depth, but it should be at least 40 inches deep and 24 inches broad. Concrete should have a minimum depth of 9 inches.

Wide Strip Foundation is seen in areas having soils with low load-bearing capacity. The regular strip foundation cannot be implemented in low-quality soils. The excessive widening and deepening of the construction to prevent wall shearing is not economically justified.

The use of reinforced concrete to construct a foundation can be a proper solution. Reinforcing bars give the foundation a tensile property, allowing the entire structure to bear strain and compression.

How can you determine whether Strip Foundation is suitable or not?

The Building Regulation for Foundation has stated a few specific rules about stip foundation suitability. The rules are as follows:-

1. Consider the required width of the foundation strip as specified in the building rules while planning any construction project.

2. Compatibility with soil chemicals should be satisfied by the concrete solution.

3. The thickness of the concrete strip should be equal to or greater than the outer side of the wall's estimation but not less than 6 inches.

4. The heights of the step should not be greater than the thickness of the foundations.

5. As much as it peeks beyond the surface of a wall, the foundation strip will expand, the chimney forming a side of the wall.

Before constructing Strip Foundation, a few preparations need to be taken; they are as follows:-

1. Before constructing the Strip foundation, put sand and gravel mixed base on the bottom after finishing the trenches.

3. The next step includes constructing the reinforcement of the foundation. Reinforcement bars can be either steel or fiberglass. 10 to 12 mm reinforcement steel bars with specially designed binding wires should be used to keep the square cells equal to 16mm maximum. Gradually place the reinforcement bars into the trench and observe its notch from the edges. Make sure that the optimum padding must not exceed 50mm. 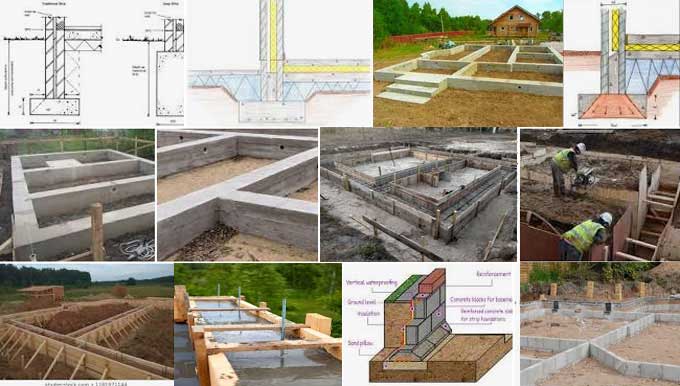