The importance of crushed stones alongside rail tracks

Railway tracks have to generally undergo heat expansion and contraction, fast movement of trains, vibrations etc. Tracks should have the strength to resist all these factors to maintain the safety and security of journey.

In order to perform this, crushed stones are arranged among the sleepers (or wooden-tie) and also around the tracks. The crushed stones have the capacity to retain the wooden sleepers in exact position and they will consecutively grasp the railway tracks securely.

The stones should be rough in shape as these may slide over each other while the train is passing over it. Therefore, stones containing rough edges are recommended.

Crushed stones can be applied for various purposes like draining of water below and around the tracks, resist the plant growth to a specific extent as well as grasping the tracks securely even in the case of super heavy trains.

Given below, the purposes & reasons for applying ballast alongside tracks—

• Normally, the sharp edges of the crushed stones facilitate the particles connected with each other to allow superior load distribution.
• In the example given below, observe the decline in stress from 50 N/sq.cm(at sleeper-ballast bed interface) to 5 N/sq.cm (at ballast bed-formation interface).

• To suppress heat expansion & contraction (because of thermal stresses), and ground movements.
• To reduce the vibrations — since ballast produces cushioning effect (thus rendering elastic property to the railway track).
• The air voids which exist among the stones take up vibrations and make it at ease for the travelling passengers as well as for the residents next to tracks.

• To allow drainage & resist formation of precipitation from rough weather (which facilitate lessening frost heaves & retain required shear stress in sub-base).
• To get rid of weed & plant growth from beneath.
• To take up much of the sounds & noises which are generated with train movements.
• Each component can naturally absorb sound, and sound absorption is reciprocal to surface area.
• Crushed stones contain increased surface area as compared to flat plane… thus facilitate absorbing significant amount of sound.
• So, it is necessary to check the variation in sound — while train is passing on track with ballast, and when train is passing on track exclusive of ballast (i.e., in places where track is fully concreted). 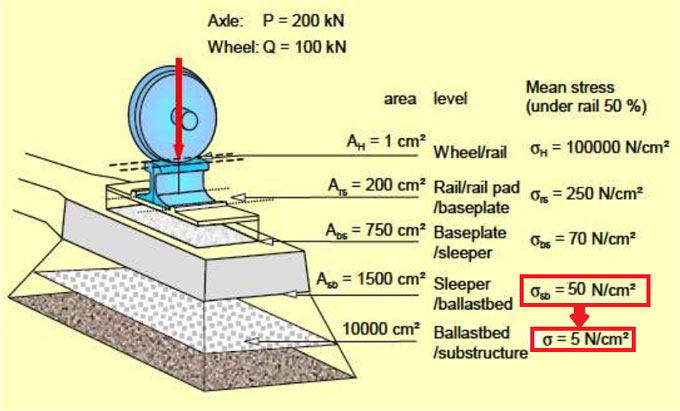