Different Types Of Admixture for Concrete

In previous time, natural admixtures were used widely but this was very expensive and not much modification was not possible in that time. On the other hand, usage of chemical admixture provides variety in the construction industry.

This are used for improving the plasticity of fresh concrete to reduce water content. Workability and water cement ratio do not affect because of using plasticizer. There are few types of plasticizer available like calcium, sodium, ammonium, lignosulphonates, polyglycol esters. These are added 0.1% to 0.4% ratio.

It complete different from plasticizer chemically. It also made of same elements but it is most commonly used in the production of high strength company. Before placing superplasticizer should be used otherwise it does affect the workability a lot. C3A has a huge effect on superplasticizer.

1. If higher amount of superplasticizer helps to make high strength concrete.
2. It also helps to produce self-compacting and high-performance concrete.
3. It also has the capability for reducing water content up to 20% to 40%.
4. Higher molecular mass can be increased in the concrete because of superplasticizer.
5. It is able to produce more workable concrete and also maintain the same water cement ratio.
6. It doesn’t affect the workability.
7. It can lower the water cement ratio by reducing cement content and increase the strength of concrete.

Though calcium chloride is not used in reinforced structure and water retaining structure because it increases the erosion in steel. This type of admixtures works very good in low temperature.

This type of admixture can low the setting property of concrete. It is also able to slow down the chemical reaction between cement and water. It also gains strength. When the mixture of cement transport in long distant place and in hot weather to prevent workability.

There few examples of Retarder are mentioned below. These are sugar, lignin, hydroxylated carboxylic acids, phosphates, cellulose. The disadvantages of it are that it also increases the plastic shrinkage and help to increase cracking. 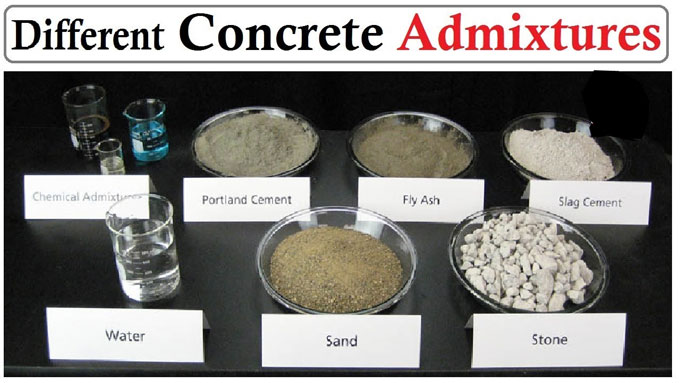