Structures use a variety of different types of columns. Generally, columns are vertical structural members that support compression loads. A load transfer system may transfer loads from a ceiling, floor slab, or room slab foundation. There is a tendency for columns to also carry bending moments around one or both axes of their cross-sections.

Structural columns transmit the load from the slab to the foundation. They are rigid vertical structural members. Three times the lateral dimension of the column is its effective depth. In compression, columns carry axial loads.

Types of Column in Construction

The construction industry also uses steel extensively. Even though steel has limitations, sometimes construction professionals do not discourage its use. The cost of the construction will be around the same as that of the original. Concreting with steel is lighter than using concrete. It is also faster to construct with steel than with concrete.

Composite columns combine two or more materials to make them. Construction does not usually use these columns. A composite column is usually made of structural steel, reinforcing steel, and concrete. Composite columns are able to carry significantly higher loads than conventional reinforced concrete columns due to the composite action.

Construction materials such as concrete are widely used throughout the world since they are readily available and can manufacture with little difficulty. However, it has a significant carbon footprint and is not environmentally friendly.

A concrete column can carry both the bending stress and the axial stress of beams, slabs. The compressive strength of concrete makes it an effective material for enhancing load-carrying capacity. The stiffness of concrete columns is higher than that of other types of columns at the same scale.

Large brick wall panels require stiffer columns and beams so that the wall doesn't crack. Generally, stiffening columns aren't structurally necessary. The purpose of infill wall systems is to provide stiffness to the infill walls. A frame's brick area should not exceed 12 square meters, so rigidity columns and beams should design accordingly.

It is the frame that must bear the lateral loads if there are no elements like shear walls.

When this is the case, columns are designed without braces. In other words, it is the opposite of brace columns.

Short columns define as those with an effective length less than 12 compared to their least lateral dimension. Compressive failure occurs in a short column.

Long columns are those whose effective length exceeds the least lateral dimension by more than 12 & such columns bend or buckle.

This type of column is used both in pilings and building elevations. It is especially important to use circular columns in seismic prone areas because of their high strength and ductility in all directions. Circular columns contain concrete more easily than other shapes because of special reinforcement.

Construction and casting of rectangular and square columns are much easier than those of circular ones because they are easier to shutter and support, so they do not collapse due to pressure while the concrete is still fluid. Construction of buildings generally makes use of them.

Buildings are composed of various components. Columns, in particular, are important. Columns provide support for axial loads. There are different types of columns that are classified according to the type of material and the structural behavior they display. All over the world, Columns serve decorative and structural functions. As a result, columns transfer the structure's force to the foundation. 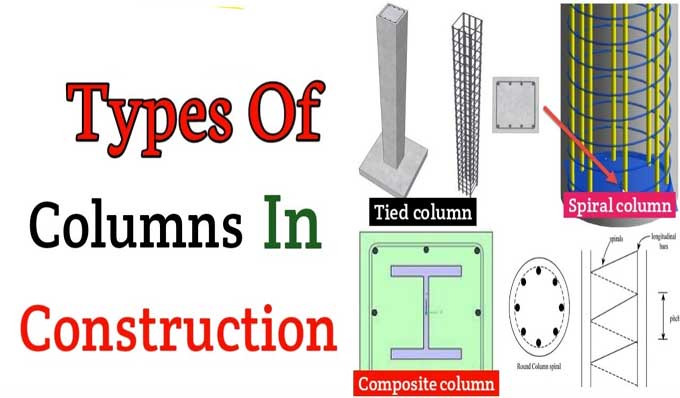