While going to deign any bridge, the tasks like computation of Design Loads and loading bridge model are very important. Given below, some crucial loads which should be taken into consideration at the time of creating the design of a bridge.

Dead Load - “Gravity loading because of structural parts of bridge”

Dead load comprises of permanent gravity forces because of structural Elements. It is basically measured as the product of volume and material density. Normally, self-weight is employed in the analysis model with the self-weight option of the analysis software. This makes the calculation step simple.

Superimposed dead loads stand for gravity loads that include other permanent items ranging from parapets and road surfacing and other non-structural and architectural attachments to the bridge. Such items last long but should have been modified during the lifetime of the structure. It has similarity with self-weight and it is measured as the product of volume and material density.

The most crucial item of superimposed dead load belongs to the road pavement or surfacing. It is not atypical for road pavements to become gradually thicker over a number of years since every new surfacing is just placed on top of the one before it. Therefore, specifically high load factor is employed to road pavement.

Imposed traffic Loading - “Because of road or rail vehicles”

Imposed traffic loads contain those forces which are produced with road or rail vehicles on the bridge. Bridge traffic can be vehicular, rail or pedestrian/cycle or genuinely any combination of these. The type and strength of the design vehicle alters on the basis of the design code. As for instance, HL-93 is used in AASHTO design code.

To examine the dynamic effects of traffic, the vehicular loads are multiplied with an impact factor frequently.

Pedestrian and cycle track - “Gravity loading because of non-vehicular traffic”

Bridge codes normally indicate a basic intensity for pedestrian loading. Again intensity is based on the design code, it is 5 kN/m2 in the Eurocode and the British standard and 4 kN/m2 in the American code.

To get more detail information, go through the following link. engineeringcivil.org 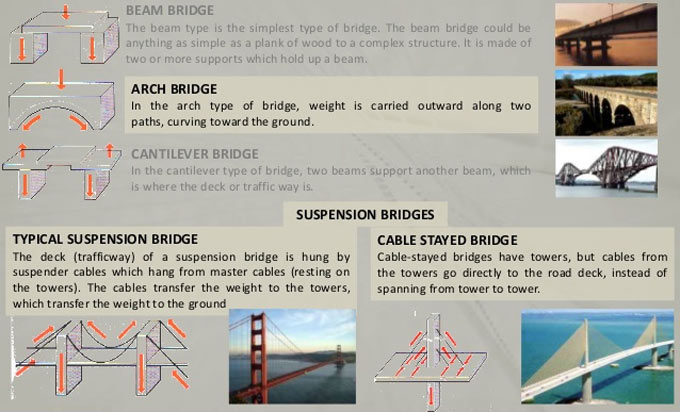