Various Types of Footings in Construction

The structures we build today are mostly heavy RCC buildings, requiring solid foundation work to stand upon. This is where footings come in. The structure above the ground is called the superstructure and the solid underground part on which it stands is called the footing.

They transfer the vertical and horizontal loads, moments and other forces of the building to the hard soil. Today, we will discuss various types of footings used in construction.

There are two main kinds of foundations – deep and shallow. The shallow foundations are generally referred to as footings. Shallow foundations, or footings, are used when the required kind of hard soil is available at a relatively short depth below the ground level, that can support the loads of the superstructure above it.

The different types of footings are as follows:

Some of the popular types of shallow foundations or footings are discussed below.

This type of footing is provided independently for each column. They are used when SBC is relatively high, the columns are far apart, and there’s not much load on the columns. Generally depending upon the shape of the column, the isolated footings may be circular, square, or rectangular in cross-section. However, depending upon the soil condition, you may want to use a different shape.

The strap beam itself doesn’t connect to the soil, it just makes sure that the small footing remains there properly.

When you have a long row of columns standing together and expecting the same loads, then you can use a kind of combined footing called strip footing. It is one thin long slab under the group of columns. It’s great for using long corridor-like buildings, or heavy walls, etc.

A mat foundation acts like a hard mat placed under the whole building, hence the name. The mat foundation is a huge slab accepting the loads of ALL the columns in the building.

It is especially useful when you have very heavy loads for the building, or the soil may show settlement. Or it may simply be more economic if your columns are quite together and providing isolated footings for each is getting expensive.

Footings are the part of building that directly touches the soil, so everything literally depends upon them. Therefore, you need to be careful in selecting which of the various types of footings in construction are you going to use. A wrong choice may bring disastrous results. 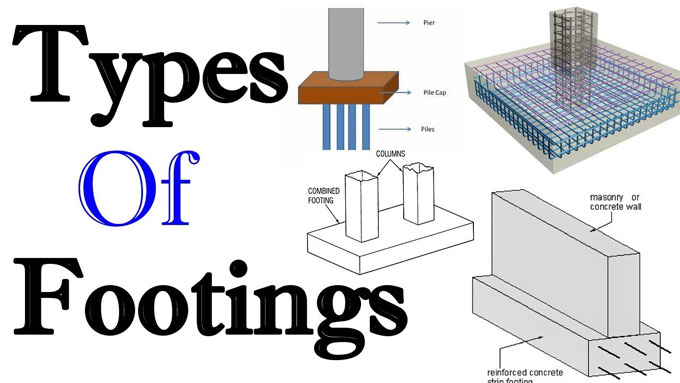