The types of external loads, operating on building and other structures, are categorized as the following :-

1. Static loads belong to the forces which are applied sluggishly and then turns out to be almost constant.

2. One instance is the weight, or dead load associated with a floor or roof system.
3. Dynamic loads fluctuate with time. They comprise of repeated and impact loads.
4. Repeated loads are forces which are used several times. These types of loads can make a difference in the magnitude, and occasionally also in the sense, of the internal forces. A good example is an off-balance motor.

5. Impact loads stand for forces through which energy is occupied in a short timespan by a structure or its components time. An instance is the falling of a heavy weight on a floor slab, or the shock wave emerged out an explosion striking the walls and roof of a building.
6. External forces are also categorized as distributed and concentrated.
7. Uniformly distributed loads belong to a distributed load that contains a constant value like 1kN/m. It?s magnitude stays uniform all through the length. Uniformly distributed load is generally denoted by W and is stated as intensity of udl over the beam, slab etc. The instance of this load is dead weight of a rolled-steel I beam.

8. Concentrated loads belong to forces containing such a small contact area that is omitted corresponding to the whole surface area of the supporting member. As for instance a beam supported on a girder can be taken, for all practical purposes, a concentrated load on the girder.
9. Another common category for external forces which are labeled as axial, eccentric, and torsional.
10. An axial load pertains to a force whose resultant goes over the centroid of a section under consideration and stands upright to the plane of the section.
11. An eccentric load stands for a force that stands upright to the plane of the section under consideration but not going through the centroid of the section, therefore bending the supporting member. 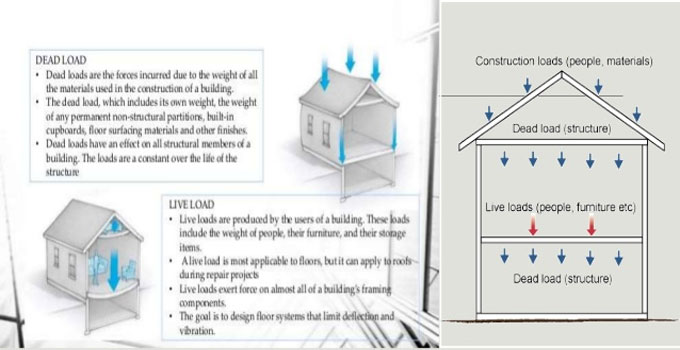