Various types of supports for loads

Roller Supports: Roller Support Example in a CraneRoller supports can be revolved freely as well as translated over the surface upon which the roller is situated.

The surface may come in different forms like horizontal, vertical or slopped at any angle. Roller supports are generally situated at one end of long bridges in the sort of bearing pads. This support facilitates bridge structure to stretch and contract as per modifications of temperature and devoid of this expansion the forces can rupture the supports at the banks.

This support does not have the capacity to withstand the lateral forces. Roller support is also utilized in frame cranes in heavy industries, the support can pass on toward left, right and rotate by withstanding vertical loads. In this way, a heavy load can be transmitted from one place to another horizontally.

Hinge Supports: With the hinge support, it is possible to withstand forces which operate in any direction of the plane. This support does not have any resistance capacity against rotation. The horizontal and vertical component of reaction is found with equation of equilibrium. Hinge support is also applied in three hinged arched bridges at the banks supports even as at the center internal hinge is introduced. It is also employed in doors to create only rotation in a door. Hinge support minimizes sensitivity to earthquake.

FIXED SUPPORT: Fixed support has the strength to withstand vertical and horizontal forces as well as moment as they prevent both rotation and translation. They are also called rigid support. To maintain longevity of a structure, a fixed support should exist.

PINNED SUPPORTS: Pinned Supports - A pinned support has the similarity with hinged support. It can withstand both vertical and horizontal forces devoid of a moment.

Ideal pinned and fixed supports are not often detected in practice, but beams supported on walls or simply connected to other steel beams are treated as pinned. The distribution of moments and shear forces is dependent on the support condition.

INTERNAL HINGE: Interior hinges are mostly used to join flexural members at points other than supports.

In some cases, it is purposely introduced with the intension that additional load breaks this weak zone in spite of damaging other structural elements. 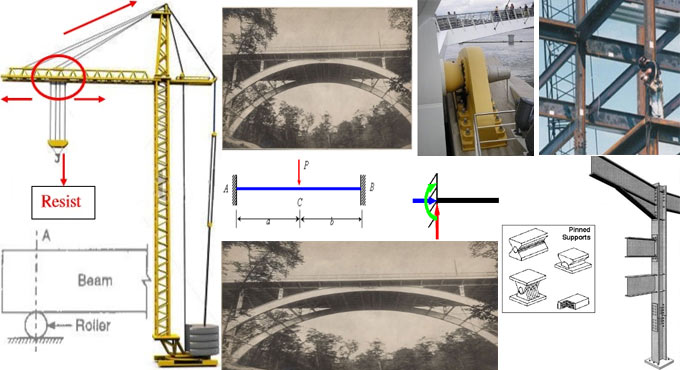