Why is Soil Important? What is the Bearing Capacity of Soil?

Soil is a thin layer of material covering the earth's surface and is established by the weathering of rocks. Solis plays an essential part while pouring footings; the soil's load-bearing capacity must be checked before using the soil's surface.

Building foundations need to be on a stable and robust soil. Different soils have different ranges in strength. Some soils are strong enough to build a high-rise building, while others can not even handle the weight of a single human. If the soil under a piece of construction is unstable, the building's foundation could sink crack, and for the worse, the entire structure could collapse.

The soil bearing capacity is referred to as the magnitude of soil to withstand any external load applied to it. In layman's terms, it is defined as the capacity of the soil to support an amount of load and pressure without failure.

The bearing capacity of soil can be distinguished into two parts:

1. Allowable bearing capacity is the maximum amount of pressure that can be applied to the soil from its foundation.

2. Ultimate bearing capacity: The minimum pressure will cause the supporting soil to collapse instantly below and close to the foundation.

The maximum load per unit area that the rock or soil could carry without breaking up or without any displacement is termed as the bearing capacity of soils.

The properties of soil, such as density, strength, and permeability, all affect the bearing capacity of the soil. In addition, soils resistance to deform depends upon factors like bulk density, water content, angle of internal friction, and the process in which load is being applied to the soil.

Footings play an essential role in construction; it is the most common type of foundation. Footings not only provide a level platform for masonry, they spread out the weight of the house throughout the area so that the soil can take the load. The soil pressure then spreads inside the footing so the soil can carry the load.

When the load under a footing unfurls out, the pressure on the soil declines. Soil present directly under the footing takes the most load; consequently, it should be thoroughly compacted.

The soil density of the soil on-site could be measured in a footing trench by using a penetrometer. The soil's bearing capacity helps determine if there is a need for a shallow foundation or deep foundation. Soil strength straight under the footing is crucial to a foundation's performance.

We can get a pretty decent idea of the soil bearing capacity in the trench bottom by using a hand penetrometer. It is a pocket-sized device with a spring-loaded probe that estimates the pressure the soil can withstand and is measured to give readings in tons per square foot.

Methods to check the bearing capacity of the soil

The various methods to calculate the bearing capacity of the soil are: 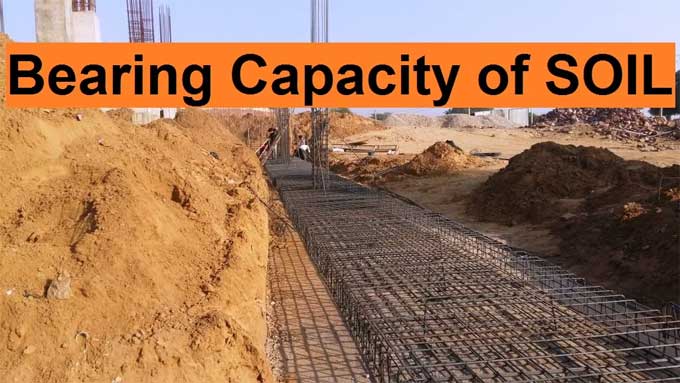